The record-breaking bid—$42,000—was the culmination of a two-week auction on Kink.com.

While you schmoes were dragging your butts in the cold to your desk jobs while trying to prevent snot from freezing on your face, a San Francisco–based domme named Maîtresse Madeline (NSFW) was most likely sleeping pretty in her cozy bed. Why? Because Maîtresse Madeline doesn’t leave the house for less than $40,000 a day.

That’s how much an Australian man was willing to pay for a private, one-on-one session with her. During a Kink.com auction yesterday, the unidentified buyer shelled out a staggering $42,000 for what is believed to be the most expensive webcam session of all time. 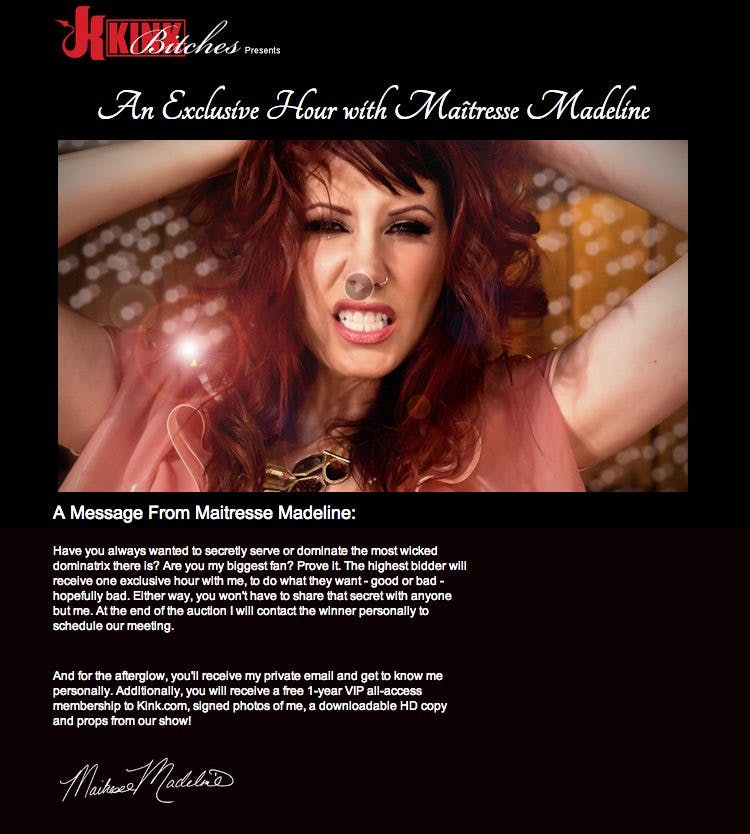 Yet in an interview with Kinky.com, Maîtresse Madeline says there’s a simple reason why someone would be willing to pay top dollar for an interactive, one-on-one cam session.

“People are paying for something they don’t get in their normal life, whether that’s a fetish that they are afraid to live out in real life or maybe their partner won’t give them what they desire and they look to cams to fulfill that missing part of their sexuality,” she told the site. “People want to remain anonymous. … Whatever your reason is, it’s a custom-made experience just for you in real time with no strings attached, whenever you want.”

The bid also makes sense in light of the enormous popularity of the webcamming industry, which generates between $1.5 and $2 billion a year.

Compared to the rest of the adult industry, which has taken a serious hit thanks to competition from free tube sites, webcamming is enormously lucrative. While most adult performers earn just a couple hundred dollars per scene, a successful cam model can earn as much as $40,000 a month without ever leaving her apartment.

“The future of adult film is, in some ways, four-dimensional. It’s about interacting in a host of different ways,” he says.

What we’re realizing through this auction and the growth of cam is that people who are fans of adult products want to be able to chat on webcam, they want to purchase the props, they want to feel like they’re building a relationship. There are a lot of people who are uncomfortable dealing with domination in real life, but are very comfortable doing it on cam. I think this indicates that adult film is moving in the direction where it’ll be part, technology, part therapy, and part entertainment.

So does Maîtresse Madeline’s $42,000 session signify an impending shift in the adult industry from pre-recorded to interactive content (and, perhaps more importantly, what does it mean for those of us on the other side of the screen, who may not be able to spend $42,000 on getting a bored Estonian model on LiveJasmin to remove her bra?) While it’s unclear if this will yield any lasting effects on the future of camming as a whole, one thing’s for certain: That Australian dude is gonna get one hell of a show.