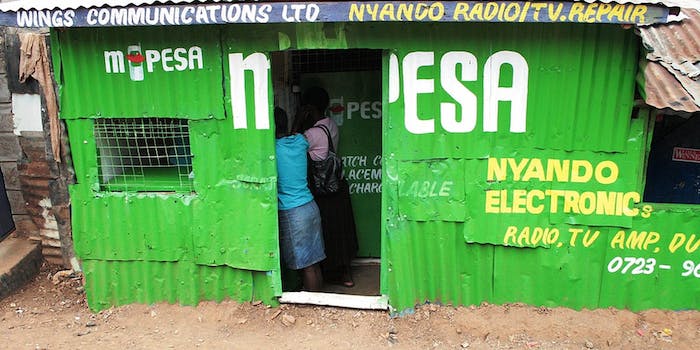 Bitcoin just made a giant leap in Africa

We have outlined the scenario of Kenya adopting Bitcoin as an official currency, and though that is still some way off—if it happens at all—it is now one significant step closer.

Kipochi, the Kenyan Bitcoin wallet service, has launched, and is using M-Pesa as a platform to transfer the digital currency, according to the South African tech blog, Memeburn.

M-Pesa is a mobile phone-based system for carrying and spending money, usually the Kenyan shilling. It is so popular that M-Pesa transactions (approximately 80 per second) provide 31 percent of Kenya’s $33.62 billion gross domestic product, according to Quartz.

M-Pesa’s owner, the mobile company Safaricom, has customer base of 19 million people is practically speaking, all the adults in Kenya. 15 million of them use M-Pesa, providing a huge possible user group for Kipochi’s Bitcoin service. The service works well on feature phones as well as smart phones, making it practical for the developing world.

M-Pesa’s fees, coupled with Kipochi’s potential customer base, may make Bitcoin appealing to Kenyans, both in country and abroad.

In fact, Adam Draper, the CEO of the BoostVC incubator, which has invested in Bitcoin startups, has told the Daily Dot he believes remittances, the sending home of money by foreign workers, will be an integral element of the digital currency’s widespread adoption.

Kenyans work around the world and send money home. Even within Africa this is a problem, as banks and other systems, like M-Pesa, often encounter regulatory blocks that make transferring money difficult and expensive, even from countries like neighboring Uganda.

On a Reddit thread, Kipochi noted the possibility of expanding into Tanzania and South Africa.