Introducing Hashbag, the mutant love child of Instagram and Craigslist

In a classic “you got chocolate in my peanut better” situation, Craigslist and Instagram have merged to form a new online marketplace called Hashbag. Well, sort of.

Craigslist isn’t actually involved in Hashbag, which just launched today. And neither is Instagram, which the site makes sure to clarify on the FAQ page. Rather, Hashbag exists on the idea that Instagram hashtags can, essentially, be monetized. According to the site, “Every year over 2 million pictures are posted to Instagram with the hashtag #forsale.” Hashbag is just the site that connects buyers and sellers.

Brooklyn designer Mike Bodge is the idea man behind Hashbag. Via email, he explained a bit about the conception and execution:

The idea came from me noticing a lot of brands and stores were posting things for sale on Instagram. It makes sense because your followers are often people that are your friends or customers. I was curious how many people actually did that so I looked up the tag #forsale and figured by the frequency that over 2 million photos were posted with that tag a year. I looked through the postings and saw that the way people sell things was not standardized…it was kind of a wild west. Some people would ask for you to text them, others would say hit me up on whatsapp if you want to buy, etc. I figured I could make an easy way for people to shop and buy.

Right now the site shows everything #forsale on Instagram and if someone is a member of the site you can buy it directly on Hashbag. If someone isn’t a member, it simply sends you over to the person’s instagram photo and you can comment there. It is 100% free to post something and create your own easy storefront of things for sale, but I take a $.99 fee for anything sold.

Currently, PayPal is the only means of payment, though Bodge is looking into other avenues.

In addition to an Etsy-like selection of clothing and accessories, you could also buy a 2013 Tesla Model S for just $96,508; tickets to see the Misfits; a bayonet; or a pair of Gucci loafers. 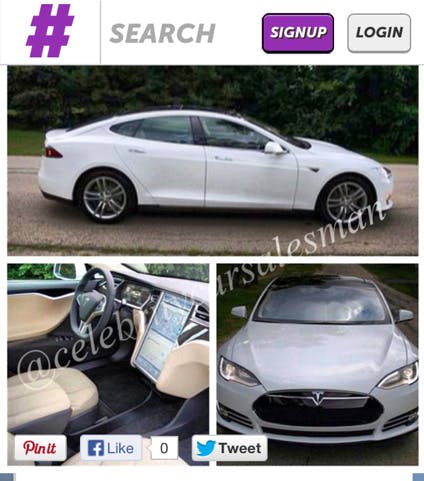 Since Silk Road has been shuttered, I was curious what images #drugs would produce. Hashbag prohibits illegal content, and “content in facilitation of the creation, advertising, distribution, provision or receipt of illegal goods or services.” However, this seller seems to be peddling pills and marijuana. Same with this seller. A lot of people are selling Xanax.

“Anything posted on Hashbag has to comply with Instagram’s content guidelines,” Bodge explained. “If you notice, you can’t search for ‘boobs’ or anything sex-related because Instagram does a great job of filtering that stuff out. If we saw something on the site that slipped through the cracks and was illegal, we’d definitely take it down. Basically if Instagram allows it, it’ll be fine to end up on Hashbag.”

Elsewhere, Bodge himself is selling a brick from somewhere in Williamsburg for $50, he says, “for fun.”