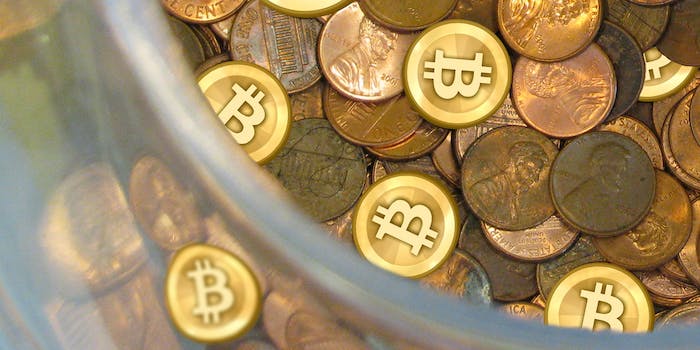 The auction site wants to know: What do you think about using Bitcoin?

Bitcoin, the digital currency that’s a favorite among crypto-libertarians,  gutsy venture capitalists, and criminals, is still waiting for that one big endorsement—a major corporate power that says, “yes, we’ll take your bitcoins” and pushes the currency from the fringes to the mainstream.

Could eBay be the company Bitcoin is looking for? If a recent blog post is any indication, the biggest auction site in North America is definitely flirting with the cryptocurrency. It’s just not quite ready for you to know about the relationship yet.

The post is called “What’s the deal with Bitcoin anyway?” It features a quick description of Bitcoin and a short instructional video boasting some pretty high production values. It ends with a question: “What do you think? Are bitcoins the real deal?”

It’s bizarre on a couple of levels.

For one, you can only view the post if you have its URL. Though published to the company’s “Deals Blog,” the post never appeared on the blog itself, and has no timestamp. It’s just kind of floating there untethered on eBay’s servers. The same’s true with the video: You can view it only if you have the link. “B Sil,” the YouTuber who uploaded it, chose to keep the clip off his or her public profile. Both are presented in a flat, even-handed, educational style. They’re definitely not subtle attacks on Bitcoin, which you might accept if eBay were actually a little worried about the currency’s rise. Take the concluding lines from the video, for instance:

While merchants are increasingly adding bitcoins as an acceptable method of payment, most major online retailers still do not accept them. While the value of outstanding bitcoins is over $2 billion, the bitcoin economy is still in its infancy. Only time will tell if bitcoins can hold their own over the long term to become a truly revolutionary technology.

Was a draft article published by accident? Is eBay just waiting for the right moment to make its interest in Bitcoin public? Whatever the answer, it’s clearly not a hoax. A spokesperson had a chance to disown the post and the video when security blog CSO reached out for comment. Instead, she wrote that “the video is strictly informational.”

So far, WordPress and Reddit are the biggest tech names to accept Bitcoin. Neither are ecommerce sites. If eBay were to suddenly begin accepting the currency, it would certainly send shockwaves through the Web economy and go a long way in popularizing the currency: The company makes about $4 billion in sales every quarter. That’s twice the current outstanding value of all bitcoins in the world.