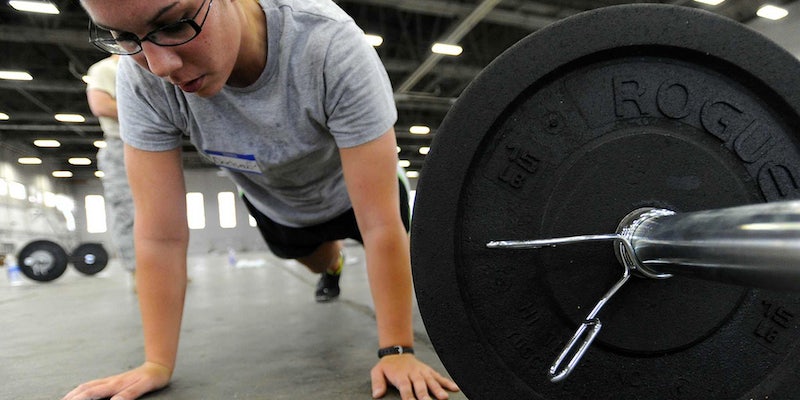 Is CrossFit using copyright to censor its critics?

In the world of fitness, few things inspire as much passion as CrossFit. Whether it’s the devotees of the company’s famously intense, notoriously cultish workout program who hail it as an amazing way to get in shape, or critics who label it as a combination of expensive, dangerous, and annoying, most people who actively think about CrossFit on a regular basis likely have very strong opinions about it.

Elgin Mones is no exception.

A Maryland-based attorney by day and satirical fitness video blogger by night, Mones falls squarely into category of people who dislike CrossFit.

In recent months, he has uploaded a series of videos slamming CrossFit to his YouTube channel, which is called Exercises in Futility. CrossFit complained, claiming the videos were in violation of the company’s copyright, and got YouTube to remove them—an act that Mones insists was motivated by a desire to silence his criticisms of the company.

In a video posted to YouTube right after receiving the takedown notices late last month, Mones, who goes by the handle Elgintensity, explained the situation—slamming both CrossFit and YouTube parent company Google:

“CrossFit is notorious for doing this—shutting people down because they speak poorly of CrossFit,” Mones said. ?YouTube’s copyright system is f*cking bullsh*t. It defers heavily to the copyright infringement claimant and it’s very difficult to even dispute this or receive warning.”

The three videos that were taken down featured Mones talking over promotional or instructional clips produced by CrossFit. One still-active video in that series, which has Mones mocking someone doing dozens of reps of CrossFit’s famous kipping pull-ups, posits that kipping pull-ups aren’t “real pull-ups” and repeatedly calls the guy doing them a ?dumbass.”

In an email to the Daily Dot, Mones detailed one of the other videos that was removed:

One of the flagged videos (the original of which, tellingly, isn’t even up on CrossFit’s channel anymore) discusses a coach with no experience at training disabled people giving a blind client with cerebral palsy a barbell to lift. The barbell was light, and the client was closely-supervised, but I asserted that the activity was nevertheless dangerous because the workout contained overhead presses, and I noted that the coach programmed her client’s routines at random. I only mocked the coach and CrossFit in general, not the client.

After a trio of his videos were taken down, Mones decided to scrap the entire Exercises in Futility YouTube channel and instead distribute his videos, which are released on a weekly basis, across a number of what he called ?shell channels” to escape detection.

He’s also selling this shirt on his personal website: 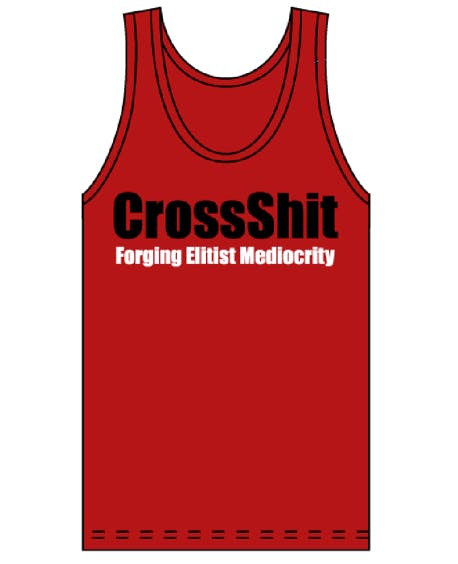 Mones insists that CrossFit targeted his videos because they were critical of the company; however, the core issue at hand is less about censorship and more about the copyright law concept of ?fair use.”

The videos that Mones commented over were created by CrossFit and, therefore, protected under the company’s copyright. That doesn’t necessarily mean, however, that people outside the company are prohibited from using them. Fair use allows people to use a portion of a copyrighted work to comment on, criticize or parody it without getting the permission of the original copyright holder.

Fair use is why Jon Stewart is able show clips from Fox News on The Daily Show without having to first ask Rupert Murdoch for permission. Mones’s argument is effectively that, because he added his own commentary on top of CrossFit’s material, his videos should comprise fair use.

But fair use has its limits. The meaning of the work has be substantially transformed by the new content added to it. The amount of the work taken is also a factor—smaller sections are typically considered more acceptable, although parodies often receive considerably more leeway.

A page explaining fair use on YouTube’s website notes:

Borrowing small bits of material from an original work is more likely to be considered fair use than borrowing large portions. However, even a small taking may weigh against fair use in some situations if it constitutes the ‘heart’ of the work.

In the United States, what does or does not constitute fair use is decided by a judge on a case-by-case basis. That said, YouTube, which has a policy of removing videos at the request of copyright holders without first taking the issue to court, often plays judge, jury and executioner.

Mones has not yet attempted to repost the videos that were taken down—he’s currently in the process of editing them to display new intro and exit screens, he says. But those videos, which he noted were substantially similar in form to the ?How Dumbasses Do Pullups” video, may have been problematic when it comes to fair use.

Mones’s pull-ups video essentially takes an entire CrossFit video and puts his own commentary on top of it, which is something that’s typically frowned upon. It would be like taking the entire new Justin Bieber album, recording yourself making fart noises all over it, and then trying to sell it on iTunes without first getting permission from Bieber’s record label.

Essentially, after watching Mones’s pull-up video, someone wouldn’t have much incentive to watch CrossFit’s original video because they’ve already seen it in its entirety—just with Mones’s commentary on top.

Crossfit is very intense about protecting its intellectual property. There’s even a page on the organization’s website where users can report people they see infringing on the company’s copyright.

?With the continuing growth and increasing popularity of CrossFit, CrossFit’s events, and CrossFit Affiliates, there comes the inevitable copycats and flat-out thieves who would profit from the strength of our brand by attempting to pass themselves off as legitimate to the unsuspecting and unknowing,” explains a note on the page. ?This page is where you can help to protect this community and what we have worked hard to achieve.”

In a document detailing its copyright policies, Crossfit general counsel Dale Saran explained why the company’s feels aggressive enforcement of its intellectual property is necessary:

If we don’t define what CrossFit is and fight to protect it, the name can lose its meaning and slide into common usage, known as ?genericide.’ An ?Escalator,’ for instance, was once a proprietary product of the Otis Elevator Company. Otis, however, lost control of the term, and ?escalator,’ lower case, became the catch-all term for moving staircases.

Additionally, there are a number of other videos on YouTube criticizing CrossFit that the company hasn’t yet taken down.

One such video is called ?CrossFit – the spawn of Satan???” and is deeply critical of the company’s methods remains on the site. It’s unknown if that’s because the company isn’t aware of videos like this one or is only concerned with videos that use its footage without authorization.

CrossFit did not respond to a request for comment.

Despite having his videos taken down, this feud with CrossFit may ultimately be a net positive for Mones. A thread featuring his video explaining why he took down the Exercises in Futility channel made it to the front page of Reddit and drew more than 2,300 comments.

“This incident did nothing but strengthen my position within the YouTube fitness community. Not only did I receive a huge wave of publicity because so many people were asking, ‘What the f*ck happened to Elgintensity’s channel,’ but my credibility shot through the roof,” Mones boasted in the video. ?CrossFit was so scared of me…that it had my YouTube channel shut down. It’s like when a rapper gets shot and suddenly his record sales skyrocket. I’m the 50 Cent of trolling.”