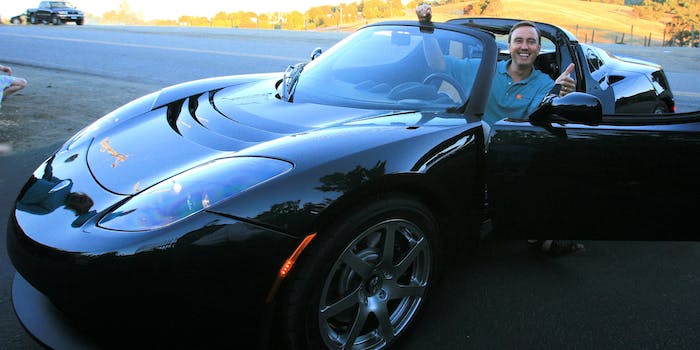 Someone used Bitcoin to buy a Tesla Model S

The Nerd Singularity is upon us.

If future historians ever attempt to identify the moment we knew we were headed for the Nerd Singularity, they’ll look at this as a benchmark.

Someone just bought a Tesla Model S with Bitcoin.

To reiterate: someone used the digital, pseudonymous cryptocurrency that’s skyrocketed in value the past year to buy a revolutionary, electric car founded by the Internet’s favorite real-life Tony Stark and named after its favorite scientist.

No cash was involved.

Nick Jones of Lamborghini Newport Beac told the Daily Dot the car sold for 91.4 Bitcoins, which the buyer delivered via payment service Bitpay.

“Lamborghini Newport Beach is proud to announce that we are fully capable of accepting Bitcoin as legal tender for vehicles,” the dealership proclaimed on its blog Wednesday. “We are excited to opening the door to this new currency.” It even tweeted a picture of the car in question.

That means that while the Model S is the only car that the dealership has yet sold for bitcoins, it’s also possible for anyone squatting on roughly 220 bitcoins to head on over and drive out with a Lambo.

A Lamborghini Newport Beach representative didn’t return the Daily Dot’s request for comment, as he was stuck on the sales floor. Presumably shaking all those newfound digital coins.