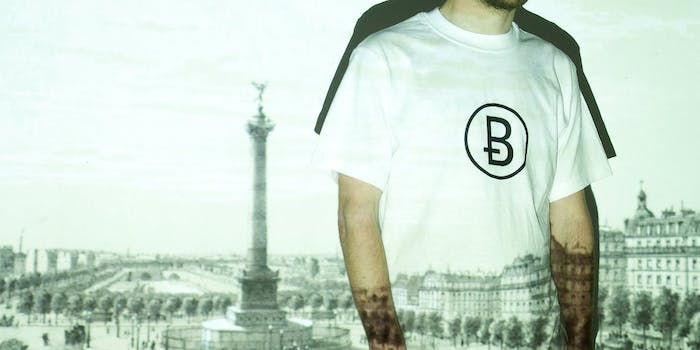 The current Bitcoin logo is actually an image, and can't be inserted neatly into text.

Since Bitcoin launched in January 2009, the cryptocurrency has had one easily recognizable logo. Reminiscent of the American dollar, it was designed by Satoshi Nakamoto, the currency’s pseudonymous creator.

Now, half a decade later, a French graphic design firm and a handful of bitcoin industry figures are lobbying to definitively change the logo to Ƀ.

The problem with the old logo, critics say, is that it’s only a logo image file. While other currencies have symbols like $, € or ¥ that can be used in any font, the old bitcoin logo has no such usage.

The Unicode Ƀ symbol, described as “Latin capital B with stroke,” “is not a logo but a symbol.”

Unicode is the computing industry standard for text, and as such displays on most programs on most computers. It contains over 110,000 characters in 100 scripts and symbols.

“As a widely distributed, peer-to-peer digital currency, Bitcoin needs an open-source graphic identity, designed with open source software by and for the community. It has to be as minimal as possible to allow further adaptations. Because Ƀ is simple, extendable and perennial, it fulfills all those requirements.”

The Bitcoin community, however, is not as pleased. On Reddit, the top voted comments call the new symbol “ugly” and “awful,” urging instead that the Bitcoin community lobby to have the original double-dash-B logo included in Unicode.

Based on Bitcoin users’ reaction, it seems unlikely that the new symbol will gain traction. It does, however, present an interesting question: Will bitcoiners effectively lobby to have their logo included in Unicode or will it be an image and thus more difficult to use than symbols like $ forever?