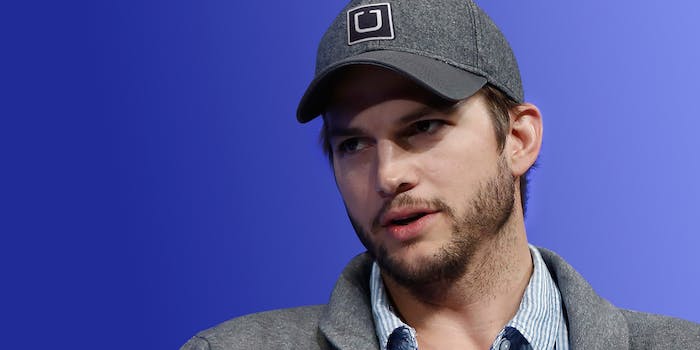 “What is so wrong about digging up dirt on a shady journalist?”

A-list actor Ashton Kutcher has fired off a series of impassioned tweets defending the comments of an Uber executive who discussed hiring researchers to investigate journalists critical of the company. This occurred just hours after the company profusely apologized, claiming that the comments do not reflect official company policy.

In August, the Daily Dot published an investigative report detailing how Ashton Kutcher’s news site, Aplus.com, “the fastest-growing site in the history of the Internet,” republished articles from BuzzFeed, Cracked, and Huffington Post without permission.

Why is Kutcher so keen to defend the taxi platform? Well, as Circa’s Anthony de Rosa points out, the fact that he’s an investor in the company might have something to do with it.

The tirade begins with a defense of “digging up dirt on a shady journalist,” and mentions Pando Daily—a Silicon Valley tech publication run by Sarah Lacy, a journalist singled out by Uber executive as particularly troublesome, and who, after the news broke, wrote that she felt “terror” over the “attack at my family.”

After that, Kutcher appeared to indicate that any criticism is fair game, whether the critic is a “public figure” in the traditional sense or not.

We are all public figures now! “@RussADeCastro: @aplusk Depends if they are a PUBLIC FIGURE, like you, or not. https://t.co/ZFemzZshxV”

The actor and entrepreneur critically discussed the media cycle in more general terms.

Rumors span the globe before anyone has an opportunity to defend them selves.

Rumors span the globe before anyone has an opportunity to defend them selves.

Everyone is guilty and then tasked to defend themselves publicly.

So as long as journalist are interested and willing to print half truths as facts… Yes we should question the source.

He then went on to stress that although an investor in Uber, he speaks only for himself.

To be clear I speak for my self not @Uber

Finally, Kutcher attempted to pre-empt criticisms of his stance.

I hope Uber investor @aplusk can back up his description of Pando’s Sarah Lacy as “shady”.

@aplusk @pando @Uber Because journalists have a lot less power than a billion $ co, and are tasked with stewarding the truth vs. profit.

As Business Insider’s James Cook pointed out, Kutcher responded with “haha” to a joke about “disappearing” journalists:

Ashton Kutcher laughed at a joke about kidnapping journalists pic.twitter.com/dAFW9pHOXT

Finally, Kutcher said he was on the “wrong side of this”:

U r all right and I’m on the wrong side of this ultimately. I just wish journalists were held to the same standards as public figures.