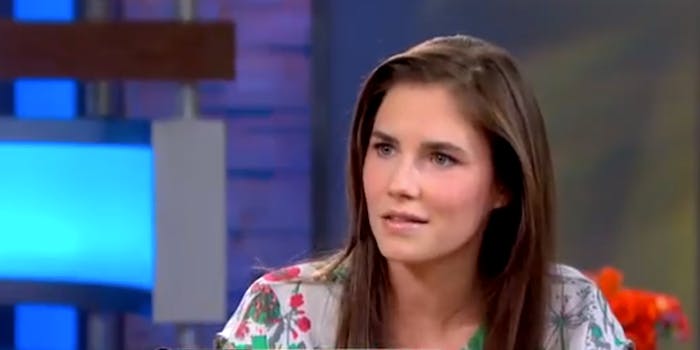 "The general consensus is you are absolutely smoking hot."

Adult film company Monarchy Distribution is hoping she’ll opt for the latter. In an attempt to make bank off the convicted murderer’s much-lauded sex appeal (which you can obviously glean from the incredibly sexy photo above), Monarchy CEO Mike Kulich is offering Knox the “unique opportunity” of shooting a film for them for $20,000, plus a quarter of all DVD and web sales.

“As you may have read, and were most likely well aware of, the general consensus is you are absolutely smoking hot,” Kulich writes in an e-mail to Knox forwarded to the Daily Dot. “Since you came back into the headlines, our loyal fan base has been e-mailing us non-stop asking about you.”

Kulich is offering Knox final say “over all terms of productions [sic],” including what sex acts she’s willing to perform and what talent she’d like to work with. “This is a great opportunity for you to make some money to put towards finishing your education and also future legal costs to help with this unfortunate retrial,” he concludes.

This is not the first time the adult film industry has made overtures toward Knox in an effort to capitalize on the immense media interest in her case. In 2011, Vivid Entertainment CEO Steven Hirsch offered Knox an unspecified sum to serve as a spokesperson for Vivid at trade and retail events, a job that would require “no nudity or sex.”