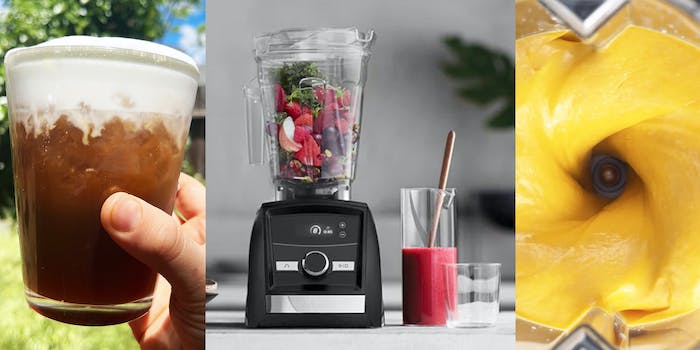 The Vitamix Ascent blender is a luxury appliance worth investing in

Make it your forever blender.

There are a million ways to flaunt your ascendance, with names that spark visions of luxury when uttered when living the good life, easy street, etc. Gucci. Mercedez-Benz. Rolex. And of course, Vitamix. This goes double when it comes to the Vitamix Ascent Series line of blenders.

Unlike an overpriced handbag with a tacky logo on it, or a crummy watch, Vitamix Ascent blenders are actually worth the investment. Let’s take a deep dive into just why investing in the champagne of blenders is a smart move.

Vitamix has made a name for itself as a powerhouse blender. It does what any basic bar blender does, but better and with more ease. You can go ahead and try crushing nuts into butter or ice into snow in a department store blender purchased for under $100. And you will have my most fervent thoughts and prayers for your success. But they won’t help you. Not only will you have a mess, you may even fry your blender’s weak motor.

It’s quite a mouthful for a simple blender. But you are getting what you pay for, with costs ranging from $399.95 to $549.95, depending on the bells and whistles you want in your Vitamix Ascent Series blender.

Vitamix Ascent blender review: Is it worth it?

I’ve been pretty familiar with Vitamix ever since I saw a live demonstration at the California State Fair in my early teens. While fellow youths were bragging about seeing The Strokes or Blink 182 live, my formative experience was watching ice get crushed into powder with a bunch of other gawking spectators, our mouths agape in awe, shirts covered in powdered sugar and carnival grease. Alas, my mother scoffed at the price when I asked if she’d buy it for me as an early birthday gift.

“Your brains are made of rice pudding if you think I’m dropping that kind of cash on your birthday present. No dice, compadre,” she said, unapologetically. But I never forgot my Vitamix experience, and a little more than a decade later, I spent about half of my paycheck on one of Vitamix’s most modest offerings.

Modest as it was, it served me well for years, and is actually still in perfect working order. I even invested in more blender carafes, including the Aer, which is one I always break out to stun guests and entrance enemies. I will say, however, that I knew I’d upgraded after switching the new blender on. The digital touchscreen flashed on and animated the Vitamix logo. Maybe I’m charmed too easily with LED screens, but it rendered a high pitch squeal out of me that could only be heard by certain dogs.

Vitamix prides itself on using its blenders as a means of coasting into a healthy lifestyle. After all, it pulverizes fruits and veggies into smooth drinks that don’t waste anything, much like a stand-alone juicer does. And then there’s the nut butter. I’m positive the prospect of homemade almond butter has been the motivating factor in countless consumers breaking down to buy one. Fresh juice and spreadable nuts are only the beginning of what’s possible with the Vitamix Ascent blender series. Here’s a look at what I made over the course of a week.

Goodies I made with the Vitamix Ascent Blender

I touched on all manner of fancy stuff you can sink money into in the intro of this Vitamix Ascent blender review. Handbags, luxury watches, and even cars all either go out of style or worse, break down. Their usefulness is fleeting. The happiness they bring is temporary, reminding you just how frail life can be (not to mention the dent they leave in your bank account).

I fell in love with Vitamix ages ago, and I’m happy to say the romance hasn’t faded one bit. If anything, it’s gotten stronger with age. And while my legacy series blender did some heavy lifting for years, the Vitamix Ascent blender may just be one of those forever appliances, like a good knife or a stand mixer. It does what every other blender wishes it could do, and it’s as reliable as a dang Volvo. Yes, it’s expensive, but it’s the sort of tool that will serve you for years, if not decades, to come.

Still, I understand that the $449 price tag is a little steep. Fine, fine. Here are a few things to consider if you’re still thinking about investing in a Vitamix.

The Vitamix Ascent A3300 Blender is available on Amazon for $449.