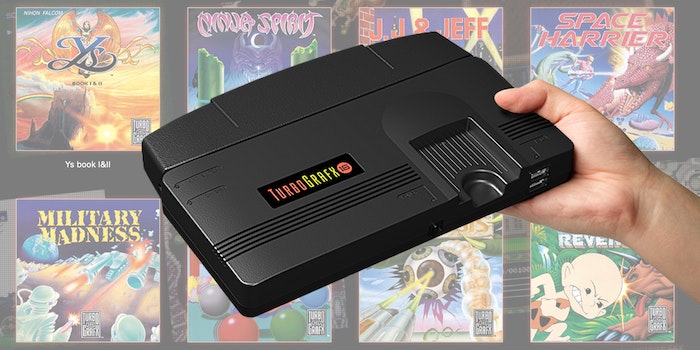 Relive a forgotten gem with the TurboGrafx-16 Mini console

The PC Engine lives on.

In the early ’90s, Sega and Nintendo weren’t the only combatants in the console wars. NEC and Hudson Soft released a 16-bit system that never got its due in its time, but lives on with the TurboGrafx-16 Mini.

Like the NES, SNES, and PlayStation Classic, the TurboGrafx-16 Mini compiles the best titles the cult system had to offer during the 16-bit heyday. Each console–which is half the size of a regular TurboGrafx-16–comes with a controller and 51 games, 46 of them unique from both the TurboGrafx-16 and PC Engine consoles including:

Plus, the console offers support of up to five players with the use of a multi-tap, so you can relive those ’90s sleepover gaming marathons with your family and friends. At only $99.99, it’s worth nabbing even if you don’t have fond memories of this often-forgotten console.

The TurboGrafx-16 is available for pre-order exclusively on Amazon and will be available worldwide March 19, 2020.