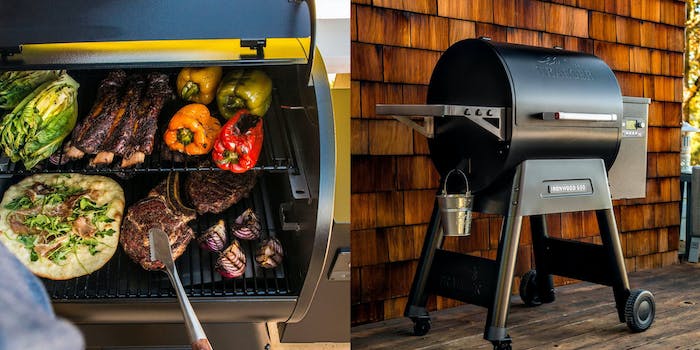 Summer sort of loses its luster once you age out of that guaranteed three month vacation. After that, it’s nothing but sweltering heat and the collective cultural aggravation that comes with it. That is, unless you’ve given yourself over to a rewarding outdoor hobby like, say, barbecuing. It can be a rather zen experience, because it requires lots of smoke, and even more patience. Taming the flame takes years, sometimes decades to master. That is, unless you’ve got a Traeger Ironwood 885 pellet grill.

Over three decades ago, Traeger invented the original wood-fired grill in Mt. Angel, Oregon. It’s a name nearly synonymous with “wood-fired grills.” Each grill operates in the same way. A large hopper moves pellets into a fire pot, where they are ignited. A fan circulates heat and smoke into the grill, to give everything from chicken to venison that distinct wood-fired flavor.

885 designates the cooking space, which comes up to 885 sq. inches. This amounts to up to 10 chickens, seven racks of ribs, or nine pork shoulders. That’s a lot of Q. Cooking temperatures run from a low of 165 degrees to 500 degrees Fahrenheit. A real stand-out feature is the way the Traeger Ironwood 885 syncs up to an app over wi-fi. From the Trager app, you can set the temperature of the grill, set a cooking timer, check the level of pellets in the hopper, and plenty of other features we’ll touch on later.

Traeger Ironwood 885 Review: Is it worth it?

I spent two glorious weeks trying out this pellet grill. I really wanted to see if all the hype was worth it. TL:DR, I was actually floored by it. Sure, it could have been a mild heatstroke, but aside from making excellent summertime eats, there were a few standout features that I really, really dug. Here are a few.

1) It’s got a space-age look and feel

Smokers, even the typical electric models, don’t often scream “technical marvel.” That’s sort of by design. It’s barbecue, after all. It’s old-timey in the best possible way. After assembling the grill in about half an hour, I turned it on. I wasn’t going to be doing any cooking on day one, but the grill did need to be primed before use.

The LCD display is gorgeous, and incredibly intuitive. It’s got built-in settings for more complicated stuff like brisket, and even has a built-in probe thermometer to ensure perfect Q every time. But more often than not, I operated the Traeger Ironwood 885 using WiFire. Through the Traeger app, I was able to adjust temperature, cooking time, and even keep a close eye on pellet levels. There’s even a massive database of recipes with detailed instructions  if you need a little inspiration.

2) User friendly, especially when it comes to the annoying stuff

I think way more people would devote time to learning to barbecue if the cooking style wasn’t bogged down with chores that have little to do with stuffing your face with pulled pork. Cleaning grills typically require more patience and elbow grease than actually making food on them. Traeger has nearly eradicated any of the annoying stuff with this grill.

Just below the cooking grates lies a drip tray that sits at an angle. A foil liner is placed on top to catch big messes. Excess fat from whatever you’re smoking drips into a divet  that spills into a hanging bucket. Aside from all the sauce you’ll get on your face, this is serious mess free barbecue.

After a couple uses, ash will collect at the bottom of the grill. This is easily cleaned up with a small broom and dustpan. Or, better yet, a dedicated mini vacuum. I only had to clean my grill once, and it took me about five minutes. Didn’t even have time to break a sweat.

3) Things I smoked using the Traeger Ironwood 885: Versatility is off the charts

I never doubted that this smoker could make great pulled pork, beer can chicken, or even stellar brisket. All of those are made by maintaining control of smoke temperatures, which the Traeger Ironwood 885 does very well. It never dipped or rose more than 20 degrees in either direction when cooking. But a grill, in my opinion, lives and dies by its versatility. Here’s a few of the things I made along with the cooking temperatures I used, in Fahrenheit.

I’m not sure there’s much more to say that I haven’t already hackneyed previously. The Traeger Ironwood 885 is a massive, smokehouse smokeshow. From cold smoke to roaring fires, I’ve not seen a grill have the amount of range of this one. Plus, it’s got a bunch of bells and whistles I didn’t even know I wanted. Incredibly easy cleanup. Control through an app. Totally user-friendly. More reliable than a damn Volvo. All while maintaining the look of a classic smoker.

If, like many, you’re looking for a summer hobby to master without having to, you know, actually invest time in mastering, the Traeger Ironwood 885 pellet grill is perfect for you. It’s available on Amazon for $1,499. If you want all the features but don’t need all that extra cooking space, the Trager Ironwood 650 is likely a better bet, and available for $1,199.