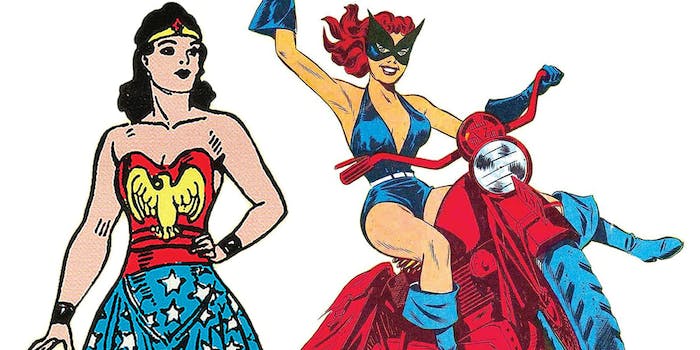 Who run the worlds? Girls.

If Wonder Woman’s debut on the big screen has you pumped, just think about all the heroines that could follow. Careful though, it might make your head explode from excitement. Captain Marvel is already slated to follow Diana Prince’s lead, but there are so many more badass women in the comic book universes.

Author Hope Nicholson makes it easy to fantasize about the potential with her latest book, The Spectacular Sisterhood of Superwomen: Awesome Female Characters From Comic Book History.

This anthology features more than 100 female protagonists in comic books, dating from the 1930s to today. The book includes iconic names, like Wonder Woman and Batgirl, and modern favorites, like Jessica Jones and Kamala Khan (a.k.a. Ms. Marvel). Characters are not only limited to DC and Marvel comics but graphic novels too—you’ll find Scott Pilgrim‘s Ramona Flowers and Silk Spectre from Watchmen, to name a few.

In addition to being a useful character guide, the book also serves as an important reference for feminist literature. Nicholson digs into the historical and cultural trends of females in comic books, one decade at a time.

The hardcover book retails for $24.95, but since it’s a new release, it is currently on sale at Amazon for $15.26, which is cheaper than the Kindle version. You even get a free digital sample of the book when you order the hard copy, so you don’t have to wait to dive in.