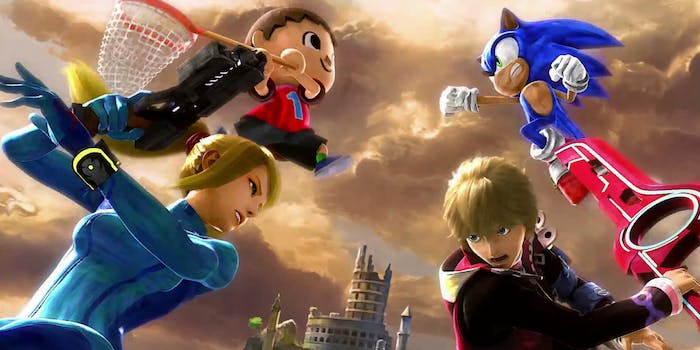 Smash Bros. Ultimate Essentials to Make You King Of The Ring

How to make your Smash Bros. experience truly smashing.

The greatest crossover ever (sorry, Avengers) is coming out for Nintendo Switch on December 7, and boy, are we ever ready for it. Here’s a guide to make the most of Super Smash Bros. Ultimate.

The latest entry in Nintendo’s “King of the Ring” Smash Bros. series is the fifth game bearing the name. It’s the sixth if we’re counting both the Wii U and 3DS versions of the fourth game. The concept is simple. Play as Nintendo’s greatest champions, nastiest villains, and cutest monsters, and duke it out in battle.

Unlike Street Fighter, Tekken, or other fighting series, the mechanics are a little different. Instead of knocking out opponents, you deal tons of damage, making them more vulnerable to being knocked out of a ring. Think of it as Sumo wrestling, with the occasional Pokémon cameo. Smash. Bros Switch is the latest entry, the appropriately named Super Smash Bros. Ultimate.

That last weird character there is only available to those who purchase Super Smash Bros. Ultimate and register it online before Jan. 20, 2019. No worries though, he’s otherwise free.

What You Need to Play Super Smash Bros. Ultimate

If you want to play older Smash Bros. entries, you’ll have to dig up a legacy console. Smash Bros. Switch, however, require you drop some dollars on a shiny new system, which admittedly, is pretty awesome. Here’s what you need to play.

It’s a console, it’s a portable device, it’s both! Nintendo’s latest console is only about two years in and is already chocked full of memorable entries. While it can be played on a screen in docked mode, it can also be played, well, anywhere. Just imagine the amazing prospect of playing Smash Bros. on a train, a plane, or heck, even in Milwaukee. Even if you’re only after Super Smash Bros. Ultimate, the game is a console exclusive, so this guy is sort of necessary.

The game we’ve all been waiting for. Everyone is here. 76 fighters enter one fighter leaves. Isabelle from Animal Crossing kicking the crap out of Mega Man. All this and more is ready and waiting for you in Super Smash Bros. Ultimate. There’s also the engrossing Spirits and World of Light single-player modes, to play when your friends are busy. Then again, considering Nintendo Switch Online is a thing, you can play Smash Bros. with anyone and everyone worldwide. Is there anything this game can’t do?

That’s all you really need. But why stop there? You can upgrade your Smash Bros. experience with a few extras that will add new levels of depth to an already engrossing Nintendo title.

If you want to play Smash Bros. online, you’re going to need a subscription to its online service. In the old days, playing Nintendo games online was totally gratis. It was also unstable, clunky, and nearly unusable. Now, for a mere $20 a year, you can enjoy playing Nintendo Switch hits like Mario Kart 8, Splatoon 2, and of course, Super Smash Bros. Ultimate online. The subscription also comes with access to a growing collection of NES classics, special offers, and even cloud saves. All for a price that breaks down to about $1.50 a month.

If a fighting game doesn’t come with DLC content, it’s automatically suspect. Thankfully, like Super Smash Bros. for Wii U/3DS before it, Super Smash Bros. Ultimate will have downloadable characters. Who will be added to the roster? At this juncture, who knows. Speculation abounds! Nintendo will start releasing each new character in a Fighter Pack, starting in 2019. Each pack will come with a new character, a new stage, and a handful of music tracks. But don’t kid yourself, you’re going to want every addition released, right? Luckily, buying them as a bundle is cheaper than buying them a la carte. The Super Smash Bros. Fighter Pass DLC includes 5 Fighter Packs and lets you download new content the day it comes out.

Because this is a first-party Nintendo game, amiibo will be present. The only problem is, we’re unsure about the full scope of what they will do in the new Smash Bros. So far, we know that tapping your figure to your Switch will unlock an AI friend that will fight, train, and learn alongside you in your journey for greatness. The first wave of new Amiibo releases concurrently with the game on December 7. The rest will trickle out next year.

Going in blind on a game like Smash Bros. isn’t for everyone. At this point, there are almost 20 years of history in the series, which is pretty daunting for folks going in fresh. If you’re still a little murky on Super Smash Bros. mechanics, consider this a guidebook to survival. This collector’s guide by PRIMA offers full coverage of the Smash Bros. Ultimate Roster, complete with move sets and strategies to bust out on unsuspecting friends and enemies. Also, it’s 464 pages of Smash Bros. content, which makes it sexy enough to be a coffee table book.

If you’re going to play Super Smash Bros. online, you’ll want to ensure your connection is as stable as possible. Unless your Switch is kissing your router, there’s a chance your connection could use a boost. This LAN adapter is a small investment to ensure a smooth connection, ensuring you won’t lose a battle due to lag, or worse, dropped connections. The adapter links to an ethernet cord, which can be plugged into a router or wireless extender.  You can get a proprietary Nintendo connector, but this model works great too, at half the price no less.

Sorry, wave dashing is still absent from Smash Bros. So are a handful of other mechanics that made Super Smash Bros. Melee a darling among competitive gamers. Still, it’s understandable why many chase the rush offered by the second entry in the classic series. Still, there’s a way to at least play Super Smash Bros. Ultimate with a Gamecube controller which is kind of, sort of, Melee-ish (Please don’t yell at me, Melee fans).

This adapter is strikingly lo-fi. Simply plug it into your Switch dock, and plug your GameCube controllers into it. It allows up to four at once, making it perfect for any Smash Bros. tournaments you plan on throwing. Heck, you might even consider dragging some GameCube controllers out of boxes in your attic. There’s a good chance they’ll still work. If not, no worries. There are plenty of gorgeous options available on Amazon. The best thing about this adapter is that it also works with your Wii U, Mac, or Windows PC.

Wires are so last century, even if the GameCube came out in 2001. If the nostalgic view of scattered controller wires across a living room floor is a little too Green Acres for your taste, there’s a modern, space-age solution. This adapter allows you to plug any GameCube adapter to your Switch wirelessly to play Smash Bros. It also allows you to plug in legacy controllers that use that weird, proprietary Wii plug, like the coveted Classic Controller. The only downside is you can only connect one GameCube controller in it at once. It also works with Windows PCs.

Smash Bros. Ultimate: Which Controller is Right for You?

At this point, the Nintendo Switch is chocked full of controller options, with almost all of them being compatible with Super Smash Bros. Ultimate. The bad news is there’s a controller glut, and finding the beautiful outliers can be tricky. Luckily, I’ve done just that. Here are some of the best Smash Bros controller options.

Forget what you know about 3rd party controllers. HORI did the impossible, in making an affordable controller that actually works. And because this is Smash Bros., you might as well use a controller bearing the emblem of your favorite character. HORI offers GameCube controllers in Mario, Luigi, Zelda, Princess Peach, and Pikachu flavors.

Do you remember how amazing the SNES gamepad felt in your hands back in the day? 8Bitdo has updated the classic controller and added two control sticks, a couple extra triggers, and full-blown wireless capabilities. It will work on Switch when you’re getting your Super Smash Bros. Ultimate on but works equally well on Windows, MacOS, Android, and even Raspberry Pi. It’s also available in SNES or NES designs.

There’s no escaping the Pro Controller when it comes to comfort, durability, and compatibility. It’s compatible with just about every game on the console and is the choice of many when it comes to playing competitively or just for fun. The only downside is it’s a little on the pricey side. Still, it’s a workhorse and will survive at least a few drops or rage throws after losing in a Smash Bros. match. There’s even a Smash Bros. themed controller if you want to drop a little extra cash on it.

If you’re going to buy a knockoff to play Smash Bros. you might as well get the best looking knockoff on the market. PowerA, along with HORI and 8Bitdo, is a very reliable name when it comes to 3rd party controllers. If you squint, this controller looks and feels like the Nintendo Switch Pro Controller it’s playing off of. It’s available in a number of colors, namely one with Mario’s silhouette smack dab in the middle. There’s a Zelda one too.

Imagine, if you will if a GameCube controller and a SNES controller had a baby. It would likely look very much like the followup to 8Bitdo’s SNES controller redesign from above. What sets this model apart from any other Smash Bros. control option is how flat it is. Most controllers are portable, but few can slide into a pocket as easily as the N30 Pro. If you’re looking for a solution that’s great at home and on the go, you could do worse.