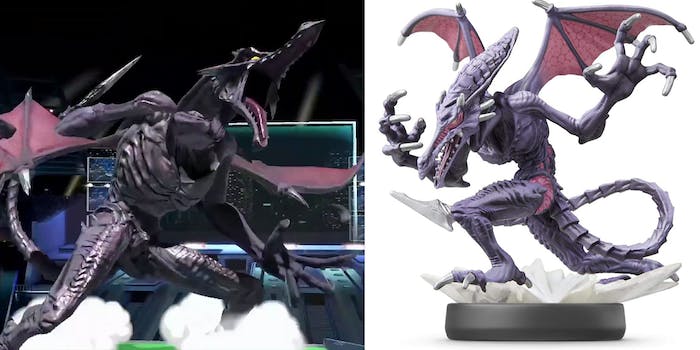 This ‘Super Smash Bros.’ Ridley amiibo is almost too big to handle

Samus’ archenemy will finally shove his massive body onto the Super Smash Bros. roster. Arm yourself for battle with a Ridley amiibo.

Yes, Ridley will finally do what was once thought impossible in the upcoming Super Smash Bros. Ultimate: he will become playable. No, he’s not too big. Granted, he seems to dwarf fellow fighters. And with every new fighter inclusion comes a new Amiibo.

Naturally, Ridley’s amiibo looks as if he’s making the ubiquitous platform crumble by simply standing on it. You’ll be able to use this amiibo to get great in-game features in the upcoming brawler. But because it’s Ridley, it also doubles as a spooky deterrent for home invaders.

This amiibo released alongside Super Smash Bros. Ultimate on December 7, and is available on Amazon for $15.99.