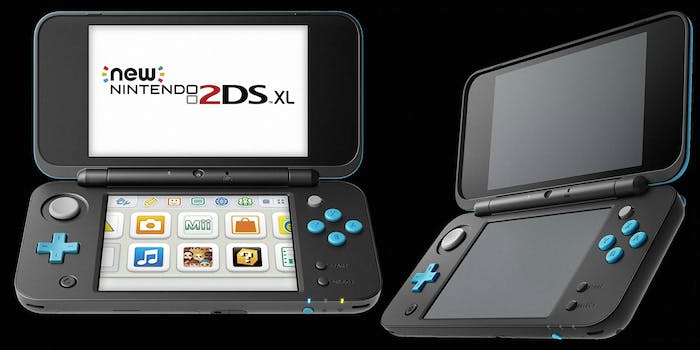 Never were a fan of the 3D function in your 3DS? You aren’t alone. The new Nintendo 2DS XL handheld offers players a new way to play all their 3DS games without having to worry about any of the 3D effects.

The Nintendo 2DS XL has amiibo and NFC support built in, a C analog stick and large screens. But what it doesn’t have is the capability to display games in 3D, a feature on its older handheld console that many people couldn’t stomach.

There are some other differences between the two handhelds. Instead of a clamshell cover, the Nintendo 2DS has a slate-like design and looks sleeker when it is closed. The unit is also slightly smaller than its 3DS XL relative.

The smaller design is hardly noticeable when using the 2DS. The controls feel more comfortable and are positioned in a natural location without feeling like fingers get cramped together in a tight space. However, it is lighter by a couple of ounces, making for a less fatigue when holding the device for play.

Instead of a shiny top, a matte finish looks stylish and won’t show smudgy fingerprints. The cartridge slot is positioned in the front and has a cover, and the microSD card reader sits next to it instead of inside the unit. This makes it easier to switch out and does not require a screwdriver to get to, unlike its 3DS brethren.

The stylus is smaller and does take some getting used to after the longer version in the 3DS consoles. The speakers have moved to the bottom of the console’s edge, making the volume a bit quieter in most games. The Home button has moved from below the bottom screen to a place to the left of the screen.

A charger comes packed with the Nintendo 2DS XL console, and a 4GB Toshiba microSDHC memory card is included. Upgrade this if you plan to download games.

The naming convention may throw off some people who might not expect 3DS games to play on a console named 2DS, but the entire library of handheld games can be played without a problem. The processor inside the 2DS is powerful to handle even the weightiest games.

The overall feel of the new console is pleasant and intuitive. And at $149.99, the price point is $50 cheaper than the 3DS XL. Obviously that makes it more attractive to someone who doesn’t already own a 3DS.

Should you upgrade? Probably not, considering this is technically a downgrade in the 3D sense. But if you want to get one for someone who is new to the Nintendo handheld family, this is a great choice at a very good price.

Of course, if you never turn on the 3D ability in your 3DS (like me), you could just give that one away and pick up the Nintendo 2DS XL. Just transfer your games and files over before offering the gift, and then settle down to enjoy your shiny new toy.