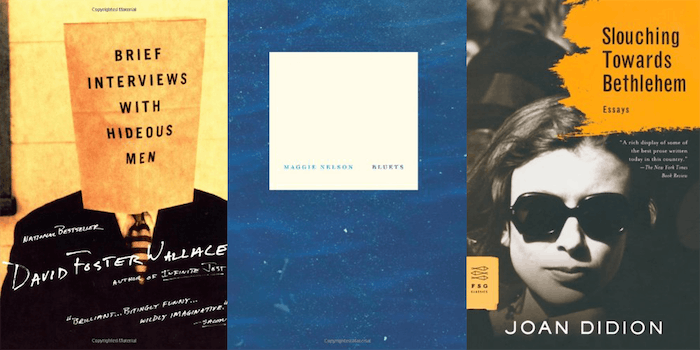 10 literary journalism classics that should be on your reading list

Go on, get cultured.

Nonfiction is a huge genre spanning from biographies to depictions of historic events. But within that genre is a niche known as literary journalism. In short, it’s long-form journalism in the shape of a novel. So it presents its subjects as characters, and some even argue (due to its style and prose) that it borders on fiction.

Also referred to as creative nonfiction, authors use literary techniques to create factually accurate narratives. And since literary journalism follows the real stories of real people, the stories are fascinating. Plus, books are awesome and anyone who believes otherwise doesn’t know what they’re talking about.

Listed below are some of our favorite works of literary journalism. Go on, pick one up and learn something new! After all, knowledge is power.

From the publisher: Wallace’s stories present a world where the bizarre and the banal are interwoven and where hideous men appear in many guises. Among the stories are ‘The Depressed Person,” a dazzling and blackly humorous portrayal of a woman’s mental state; ‘Adult World,’ which reveals a woman’s agonized consideration of her confusing sexual relationship with her husband; and ‘Brief Interviews with Hideous Men,’ a dark, hilarious series of imagined interviews with men on the subject of their relations with women. Wallace delights in left field observation, mining the absurd, the surprising, and the illuminating from every situation. This collection will enthrall DFW fans and provides a perfect introduction for new readers.

2) Slouching Towards Bethlehem by Joan Didion

From the publisher: The first nonfiction work by one of the most distinctive prose stylists of our era, Joan Didion’s Slouching Towards Bethlehem remains, decades after its first publication, the essential portrait of America―particularly California―in the sixties. It focuses on such subjects as John Wayne and Howard Hughes, growing up a girl in California, ruminating on the nature of good and evil in a Death Valley motel room, and, especially, the essence of San Francisco’s Haight-Ashbury, the heart of the counterculture.

3) The Perfect Storm: A True Story of Men Against the Sea by Sebastian Junger

From the publisher: It was the storm of the century, boasting waves over one hundred feet high―a tempest created by so rare a combination of factors that meteorologists deemed it “the perfect storm.” In a book that has become a classic, Sebastian Junger explores the history of the fishing industry, the science of storms, and the candid accounts of the people whose lives the storm touched. The Perfect Storm is a real-life thriller that makes us feel like we’ve been caught, helpless, in the grip of a force of nature beyond our understanding or control.

From the publisher: Tom Wolfe’s The Electric Kool-Aid Acid Test ushered in an era of New Journalism, called “An American classic” (Newsweek) that defined a generation. “An astonishing book” (The New York Times Book Review) and an unflinching portrait of Ken Kesey, his Merry Pranksters, LSD, and the 1960s.

5) The Executioner’s Song by Norman Mailer

From the publisher: Arguably the greatest book from America’s most heroically ambitious writer, The Executioner’s Song follows the short, blighted life of Gary Gilmore who became famous after he robbed two men in 1976 and killed them in cold blood. After being tried and convicted, he immediately insisted on being executed for his crime. To do so, he fought a system that seemed intent on keeping him alive long after it had sentenced him to death. And that fight for the right to die is what made him famous. Mailer tells not only Gilmore’s story, but those of the men and women caught in the web of his life and drawn into his procession toward the firing squad. All with implacable authority, steely compassion, and restraint that evokes the parched landscape and stern theology of Gilmore’s Utah. The Executioner’s Song is a trip down the wrong side of the tracks to the deepest source of American loneliness and violence. It is a towering achievement-impossible to put down, impossible to forget.

6) Into the Wild by John Krakauer

From the publisher: In April 1992 a young man from a well-to-do family hitchhiked to Alaska and walked alone into the wilderness north of Mt. McKinley. His name was Christopher Johnson McCandless. He had given $25,000 in savings to charity, abandoned his car and most of his possessions, burned all the cash in his wallet, and invented a new life for himself. Four months later, his decomposed body was found by a moose hunter.  How McCandless came to die is the unforgettable story of Into the Wild. Immediately after graduating from college in 1991, McCandless had roamed through the West and Southwest on a vision quest like those made by his heroes Jack London and John Muir.  In the Mojave Desert, he abandoned his car, stripped it of its license plates, and burned all of his cash.  He would give himself a new name, Alexander Supertramp, and, unencumbered by money and belongings, he would be free to wallow in the raw, unfiltered experiences that nature presented.  Craving a blank spot on the map, McCandless simply threw the maps away.  Leaving behind his desperate parents and sister, he vanished into the wild.

From the publisher: Welcome to the hilarious, strange, elegiac, outrageous world of David Sedaris. In Naked, Sedaris turns the mania for memoir on its ear, mining the exceedingly rich terrain of his life, his family, and his unique worldview-a sensibility at once take-no-prisoners sharp and deeply charitable. A tart-tongued mother does dead-on imitations of her young son’s nervous tics, to the great amusement of his teachers; a stint of Kerouackian wandering is undertaken (of course!) with a quadriplegic companion; a family gathers for a wedding in the face of imminent death. Through it all is Sedaris’s unmistakable voice, without doubt, one of the freshest in American writing.

8) The Glass Castle: A Memoir by Jeannette Walls

From the publisher: The Glass Castle is a remarkable memoir of resilience and redemption, and a revelatory look into a family at once deeply dysfunctional and uniquely vibrant. When sober, Jeannette’s brilliant and charismatic father captured his children’s imagination, teaching them physics, geology, and how to embrace life fearlessly. But when he drank, he was dishonest and destructive. Her mother was a free spirit who abhorred the idea of domesticity and didn’t want the responsibility of raising a family. The Walls children learned to take care of themselves. They fed, clothed, and protected one another, and eventually found their way to New York. Their parents followed them, choosing to be homeless even as their children prospered. The Glass Castle is truly astonishing—a memoir permeated by the intense love of a peculiar but loyal family.

From the publisher: A lyrical, philosophical, and often explicit exploration of personal suffering and the limitations of vision and love, as refracted through the color blue. With Bluets, Maggie Nelson has entered the pantheon of brilliant lyric essayists.

From the publisher: A gargantuan, mind-altering comedy about the pursuit of happiness in America. Set in an addicts’ halfway house and a tennis academy, and featuring the most endearingly screwed-up family to come along in recent fiction, Infinite Jest explores essential questions about what entertainment is and why it has come to so dominate our lives; about how our desire for entertainment affects our need to connect with other people; and about what the pleasures we choose say about who we are.