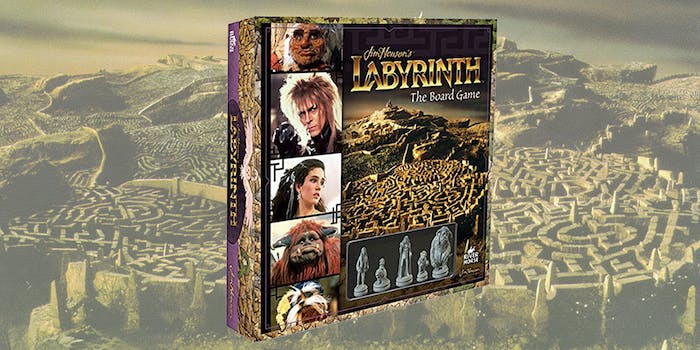 If you’ve never forgotten the sight of David Bowie as the king of a magical land of fantastical creatures in the 1984 film Labyrinth, you aren’t alone. The film’s cult influence can be felt decades later, and one of its most recent tributes is this beautiful officially licensed board game.

Created by game company River Horse, the result is very much a labor of love. Including a beautiful board that depicts the labyrinth and its long winding path to Jareth’s castle, it’ll look familiar right away. But perhaps one of the coolest parts of the game is the playing figures, which can be hand painted in any way you like (including Sarah, Hoggle, Ludo, Sir Didymus, and Jareth).

Made for 1-5 players, the game can be completed in about an hour and is easy to customize. And naturally, it’s your goal to race to the castle before the Goblin Clock strikes 12 and take back Sarah’s baby brother Toby – just like in the film.

The game sold out in its first run through River Horse, but now it’s back in stock through Amazon for $39.19 (regularly $50). Any fan of the film will be delighted to add it to their collection, not to mention paint figures of some of their favorite fictional characters of all time.