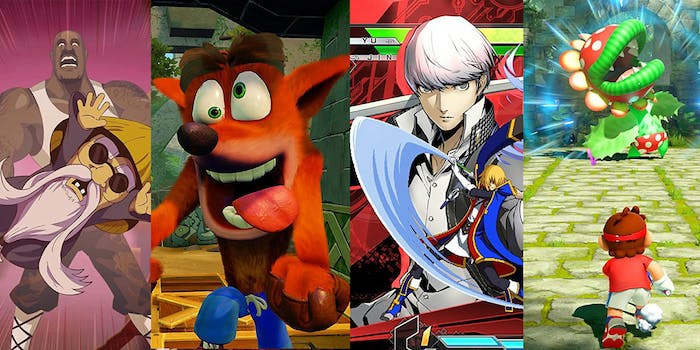 The top 5 June Nintendo Switch releases that deserve your attention

Escape the summer heat with these cool games.

When the temperature rises into the triple digits, going out is literally too hot to handle. Park by your television with an ice cold beverage and take in these June Nintendo Switch releases.

With E3 around the corner, there’s a slew of good stuff coming to make every summer gaming session totally chill. Do you know what’s even more chill? When you pre-order them through Prime, you get free release day delivery and a 20% discount at checkout. Enough with the heavy-handed puns, though – on to the games!

Millenials likely don’t remember the SNES game Shaq-Fu starring the legendary b-ball player. It wasn’t very good and was likely a cynical cash grab. This sequel puts Shaq back in the limelight in a brand new, incredibly solid looking beat-em-up. And yes, they got the real Shaq to provide the voice of the titular character. Releases June 5.

If you were ever hungry for a Mario Tennis RPG, your very specific craving will finally be slaked. Mario Tennis Aces will not only put Mario back on the tennis court but put him at the center of a brand new adventure. Best of all, you can play the game before it comes out during a weekend-long demo session from June 1-3. Plus, there’s a playable Chain Chomp. Releases June 22.

In Happy Birthdays, you’ll spawn life into a planet, making valleys, mountains, and all manner of flora and fauna. Create single-cell organisms that will evolve into massive creatures. You will decide how your planet will take shape, and what glorious creatures will inhabit it. It’s sort of like the game Spore if it was actually good. Releases June 5.

The latest entry in the BlazBlue series has the most amazing roster yet. Series mainstays like Jin and Ragna are back, ready to throw down. But this entry includes plenty of guests from Persona 4 Battle Arena, Under Night In-Birth, and even RWBY. Grab some friends and dive into the awesome 2 vs 2 gameplay system in a gorgeous 2D tag team based fighting game. Play competitively alone or with friends locally or online. Releases June 5.

There’s something incredibly perverse about watching Sony’s answer to Mario on a Nintendo system. In the ’90s, Crash Bandicoot and Mario were mortal enemies. Now, Crash’s first three games are totally at home on your Nintendo Switch, remastered in glorious HD. Play as Crash or his sister Coco Bandicoot across three games. Eat Wumpa fruit, run away from massive boulders, and beat up every nerdy scientist you see. Releases June 29.