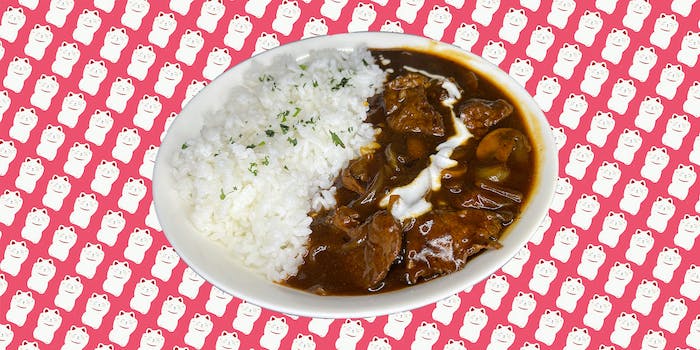 Put it into your rotation, quick!

What’s the first thing that comes to mind when someone says “Japanese food?” Sushi. Tonkatsu. Bento box. Jiggly cheesecake. All tasty, but all fairly intro level, amateur hour foods. Allow me to introduce you to one of the unsung heroes of the Japanese home cooking repertoire: hayashi rice.

What is Hayashi Rice?

Hayashi Rice is a popular Japanese dish that loosely translates to “hashed beef rice.” It’s made of sliced beef stewed with onions and occasionally mushrooms, stewed in a thick demi-glace sauce and served with rice. Many say that the dish originates in the former mining town of Ikuno in Hyogo Prefecture, Japan.

It’s part of a subset of Japanese foods known as yoshoku, or “western style dishes.” The traditional beef stew got a makeover from Japanese cooks over decades, and hayashi rice is the result. While there are many ways to make it from scratch, it’s often made using convenient roux blocks, like Japanese curry. My favorite is made by the same folks who make great curry roux blocks, S&B.

How to make Hayashi Rice: A simple Hayashi rice recipe

You can make Hayashi rice from scratch. I’ve done it! It took a day and ultimately wasn’t much better than the stuff out of the box. There are instructions on how to make Hayashi rice right on the box. However, with just a couple extra ingredients and steps, you can make something truly magical.

Like most stewed recipes, Hayashi Rice tastes better the next day. It also freezes quite well. But it probably won’t last past a day or two, considering how tasty it is. The roux keeps well in the pantry for ages. If you’re tired of Hayashi rice, you can make plenty of other Japanese delicacies with it, including omurice.

Half a full block cooked in 1 ⅔ cups of water makes an excellent gravy for everything from meatloaf to Loco Moco. Even if you’re not going to make Hayashi Rice soon, it’s a fantastic and cheap pantry pal to keep on hand. S&B Tasty Hayashi Rice Sauce Mix is available on Amazon for $4.23.