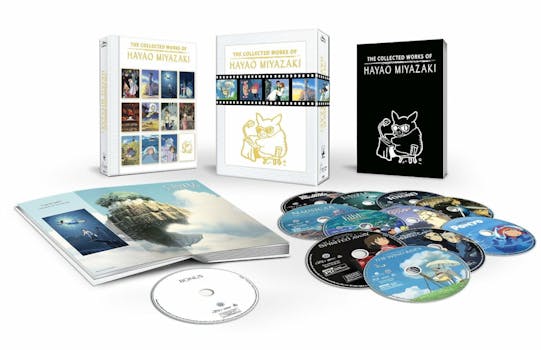 If you’re the type of Studio Ghibli fan that has art from the films all over your house (or maybe even Totoro tattoos, ahem), you may be a bit like us: fascinated with all things made by the hands of master animator Hayao Miyazaki.

If so, you may have collected all the films one by one. If you haven’t done that, you should check out this droolworthy Blu-Ray collection that Amazon released as an exclusive. It includes 11 films from the Ghibli library, starting with Lupin the Third: The Castle of Cagliostro up to The Wind Rises. This set was released in 2015, so unfortunately it does not contain When Marnie Was There, but you can grab a separate copy of that if you want to be a completionist.

Of course, a set this grand comes with bonus features. You get The Great Dichotomy: Looking at the Works of Hayao Miyazaki by Tomohiro Machiyama, as well as a peek into some of Miyazaki’s earliest work. There’s a television pilot for an early ’70s series called Yuki no Taiyo (Yuki’s Sun) that Miyazaki directed, storyboarded and animated himself. You also get to see episodes of an anime series called Akado Suzunosuk (Little Samurai), which was storyboarded by Miyazaki.

This set retails for $229.99, which is definitely a splurge, but worth it for a devoted fan. Be warned that cheaper box sets do exist on Amazon, but they are bootlegs. The real thing costs more, but it’s 100 percent authentic – not to mention worth it.