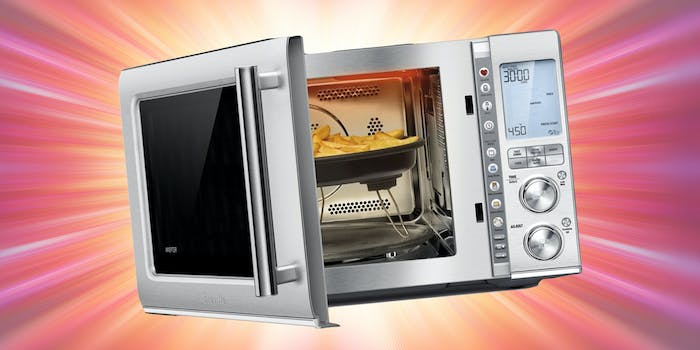 A microwave, convection oven, and air fryer in one glorious package.

Microwaves. They used to be these massive, clunky things you used to walk inside of. Or was that computers? Who can remember, considering that microwave technology has been more or less stagnant since they developed the rotating wheel thingy. That is, until now. The Breville Combi Wave 3-in-1 is a microwave, but it’s oh so much more.

The 3-in-1 is an apt name, considering that this microwave does much more than heat up leftovers or popcorn. Along with microwave cooking, the appliance is also a convection oven and an airfryer. It even comes with a sleek non-stick air frying pan. More on that later.

The Breville Combi Wave 3-in-1 has three different heating styles. The Fast Combi function lets you combine the speedy heat of a microwave oven with the browning and crisping capabilities of an airfryer. When you open the oven, there’s even a heating element on the appliance’s ceiling, no doubt where this “Fast Combi” magic happens.

Breville Combi Wave 3-in-1 Review: Is it worth it?

As someone who does a lot of serious cooking, I never thought I’d have so much fun using a microwave. Sure, a microwave oven is great for steaming veggies, heating water, and melting butter and chocolate. But actual cooking? Pass. Hard pass.

Things I made in the Breville Combi Wave 3-in-1

I figured, considering this whole Combi Wave concept was totally new to me, that I would take advantage of the oven’s presets. The “Food Menu” has built-in settings for a myriad of popular foods including pizza, cookies, french fries, cake, and even fish, meat, and chicken. Spoilers: all of these presets rendered amazing results. Here are a few things I made with the Breville Combi Wave 3-in-1.

Aside from these impressive little feats, the microwave performed a few more–what I’m going to call, “mini-miracles.” Microwave bacon and breakfast sausage that was actually browned and crispy. Diced sweet potato that got a little caramelization. It even air fried chicken wings lightly dusted in cornstarch to crispy perfection.

Other features I liked

I never thought I would use the word “fancy” in conjunction with the word “microwave.” But from the stainless steel exterior to the LCD screen, this microwave practically screams “bougie.” Using the screen was also intuitive, especially when using the food menu presets. There’s even a dedicated “just a bit more” button that adds a little cook time to your food should it need it.

The air frying pan is perhaps my favorite feature, as the appliance takes full advantage of it. Not only is it easy to use, it’s (more importantly) easy to clean. And it parks right in the microwave when it’s not in use.

I’ve been using it almost exclusively for my baking needs. During the summer, using even a countertop oven adds unwelcome heat to a kitchen. Still, I’m a “have your cake and eat it too” sort of guy. In the case of summer baking, we’re talking actual cake.

And yes, while using the airfryer or the oven functions, the microwave does heat up more than your average microwave. However, the kitchen heats up considerably less than when I use my countertop oven. Cool! (Literally).

Usually, when an appliance sells itself as being able to do more than one thing, it does. And occasionally, it does these things…poorly. I never imagined I’d be able to make pan pizza or french fries using the same appliance I use to make popcorn.

The Breville Combi Wave 3-in-1 accomplishes all three of its cooking mediums with room to spare. It’s easily one of the priciest microwave ovens on the market, but consider this. It’s a countertop oven, an air fryer, and a microwave. Let’s do a little math!

Add these all up and you’ve got $454 between three appliances. Suddenly, the Breville Combi 3-in-1’s price tag doesn’t seem so high. If your kitchen is on the smaller side, or you just want to get rid of countertop clutter, this little appliance does triple duty, and looks great doing it.

Where does microwave innovation go from here? No, you still can’t stick a cast iron pan inside one, but you can make a batch of brownies or even roast a whole chicken. The Breville Combi Wave 3-in-1 is a modern appliance marvel, and it’s available on Amazon for $449.

While I adore the pan that comes with the Breville Combi Wave 3-in-1, there’s a wide world of microwave friendly cookware that you may already have in your kitchen. However, here are a couple favorites of mine that work with this microwave, but also work with, shall we say, lesser models.