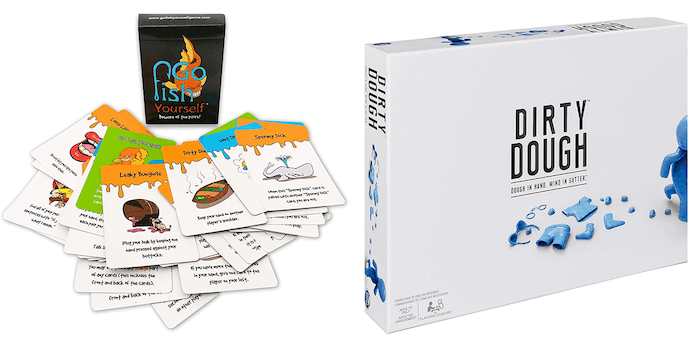 Party on this Christmas, you filthy animals.

The holidays are great for three reasons: family, food and group party games! Seriously, there’s no better combination than eating delicious food with those you love in between rounds. But there’s only so many times you can play the same game (especially in the same night) before someone gets bored.

That’s why you should pick up a few new titles before the holidays roll around. They may not be holiday themed or have you singing Christmas carols, but they will amp up the spirit of joy!

Players decide to play on their own or in teams, and then must choose a card from one of the following categories: Sexy, Kinky or Disgusting. Once a card has been picked, it’s that player’s job to handcraft the clue in under 60 seconds using only the dough and tools provided–no hints, cheaters! Then it’s up to everyone else to guess the clue and whoever gets it right, wins that card. Sounds a little too easy, right? Well, hold on, there’s more. Players will also compete against Gross Challenge Tiles which turn up the game’s level of difficulty by adding obstacles to the sculptor’s objective–like only being able to sculpt with one hand, having to sculpt with your eyes shut, using your friend as a mannequin instead of the dough, Or challenge someone on the other team to a Dough Down Throwdown where you both sculpt the same filthy clue. The first team to guess correctly wins the round!

Why put one person on the spot when you can have your entire family act something out, leaving one person to guess the answer? TBH, this is how Charades should really be played.

Take your entire family on a cross-country adventure for one low ticket price! But winning this strategy game isn’t as clear-cut as just building your track. There are a few other rules that get factored in for points (like who built the longest track) before a winner is announced.

There’s nothing taboo about this! This family-friendly board game is the ultimate guessing game, except all the “obvious” clues are off limits.

Consider this game to be one giant round of superlatives. Totally NSFW but an inexplicable amount of fun as you vote which player is most likely to do X while drunk or stoned or just because they’re dumb AF. Here’s a disclaimer for you: if your feelings are easily hurt (which is totally fine, it’s okay to be sensitive!) this game is NOT for you.

Take charades and mash it together with the game of telephone, and boom, you have Telestrations. It’s a guessing game of what the other person was trying to say, without actually saying anything at all. Instead, players have to draw whatever is printed on their cards and everyone else has to guess.

It’s Cranium, but with a suspenseful twist! Similar to charades, you’re destined to act out ridiculous scenarios. But in Cranium you can also pull cards that have you doodling things you didn’t even sketch out in art school.

Settle down with your friends, family, food and some beer if you plan to play this because signing up for Catan means you’re in it for the long haul. Strategically trade items with your opponents while trying to settle and build on the board. The only resources you have are wood, ore, grain, and brick. So you have to really use your noggin in order to monopolize the board.

Do you think you’re funny? Well, this comic-style card game will (dis) prove that. Using prompts and fill in the blank cards, players create their own original comic strips in the style of famous webcomic Cyanide & Happiness. Plus, there are tons of expansion packs for you to add to make gameplay even more ridiculous–our two faves are the very NSFW Stroking Hazard and Toking Hazard expansion packs.

This adult party game is played similarly to Cards Against Humanity, except memes are involved. So things are destined to get out of hand, leaving you with a stomach full of stitches. But it’s all in the name of fun!

This family-friendly card game is truly outrageous. It’s essentially the card game version of Russian Roulette (or so the developers claim). Players draw cards until they pull an exploding kitten, killing them and knocking them out of the game. Unless they have a  Defuse card which saves them – in that round, anyway. And if you’re looking for an 18+ option, you should check out the Exploding Kittens: NSFW deck.

The original card game to make players cringe or cry with laughter. It’s truly a classic and can’t ever be played too many times. So if you live under a rock and don’t own or have never played this, we’re sorry. You’re really missing out. But here’s a pro tip for you: each round a winner is picked by the judge who pulls the prompt card, so if you’re antsy to win it’s a good idea to tap into their sense of humor. Plus, there are so many CAH expansion packs that you’ll never make the same combination twice.

You played Go Fish as a kid, now you’re all grown up and guess what: so is the game! Go Fish Yourself is similar to Go Fish except the creators have really ramped up the incentive to sabotage other players. As you create pairs, players will find themselves getting really creative as they complete the ridiculous set of rules printed on each pair. If you can’t force yourself to play the pair, you’re out.

This pocket-size party game is one giant brain teaser, so you’ll actually get smarter the more you play it. Players flip cards and shout what they see. But depending on the card you either have to show its background color, what’s depicted or any (swear) words printed on it. Mess up and you collect more cards. The first person to get rid of all their cards wins. TL;DR: don’t fu*k up.

It’s played just like the regular version (which you could find here), except this version, stands five feet tall. So you can play on the floor or on a table for an added challenge. Just remember whichever piece you touch you have to pull! So try not to ruin it for everyone. And if you’re looking for a new take on the classic game of Jenga, you should check out the all-new Bob’s Burgers edition!

In this intense game of “Would You Rather…” a judge creates a horrible scenario by combining cards. Each player is allowed to ask questions about the cards so the judge can give them hints on what is what. Then an unlucky player anonymously picks their poison, with hopes that everyone else agrees with them.

How well do you know your friends? This game will tell you. If you guess their likes, you’re a cool cat and get points and stuff. But if you guess wrong, you’re an asshat and everyone laughs at you. This game is meant to be offensive and inappropriate, so if that’s not your style, move along!

This is the ultimate cringe game. No, seriously, the entire point of the game is to get your friends to say words like “moist.” Ugh. Gross. Anyway, to play: you describe the word on the card using other words and then you get the satisfaction of making people cringe by having them say weird sounding words.

Using the most outrageous slang, impress the judge by pairing the most ridiculous prompt cards with other cards made up of hashtags, slang, etc. Played similarly to Cards Against Humanity, except you can act out and illustrate your combinations. Because, well, why not?

The game is in the name. This game combines old school and new school drinking games with one goal: to make you black out. So stock up on the booze, practice your flip cup and carb up.