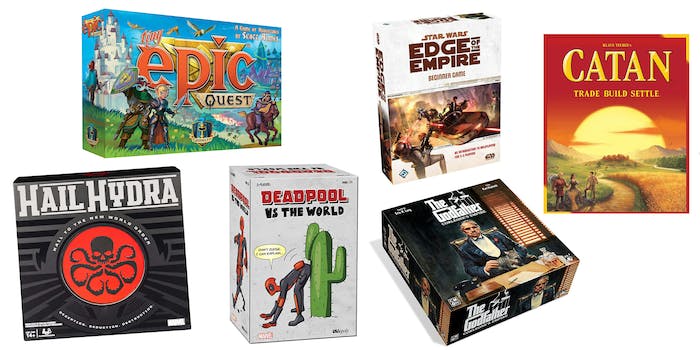 Break up with your Dungeon Master.

Are you tired of donning your Dungeon Master cap and orchestrating a game that takes too long to play? Here are some of the best tabletop games that aren’t Dungeons & Dragons.

There are no hard feelings when it comes to Gary Gygax’s hit, but sometimes, you want a different tabletop experience. Below are some of the latest and greatest titles that will make each game night an adventure.

It’s not just a game, it’s a pop culture phenomenon. After arriving in a new world, you and fellow settlers must battle for resources. Borrow, barter, and yes, even steal as you expand your reach across Catan.

If you’re the kind of person who can’t have a current events conversation without dropping the word “Illuminati,” this tabletop game is made for you. Collect conspiracy cards by answering trivia, while avoiding “Cover Up” cards. Unleash harsh truths that would shake the world, like when Ghost JFK revealed dolphins are all secretly aliens.

This board game uses Francis Ford Copolla’s film classic as a backdrop for a winner-take-all battle of wit and might. Each player is a mob boss, shaking down businesses for money, selling illegal goods, or straight up brawling with enemies. Launder, bribe and even break out the occasional horse head to vie for Don Corleone’s favor to inherit his empire.

Deception is your greatest weapon in this board game with the incredibly loaded title. This fast-paced game plays out like a season of House of Cards. Liberals and Fascists are set against each other on the political stage, but nobody knows who is who. Uncover the Fascists before it’s too late, and they install a liberty-crushing dictator.

Finally: a board game that’s as fun to play as it is beautiful. Journey across Japan’s East Sea Road with fellow travelers in search of discoveries and natural marvels. Every aspect of this game, from the pieces to the board and card screams elegant. Win by experiencing as much of nature’s beauty as possible. Considering the game’s design, such a task won’t be too hard.

6) Deadpool vs The World

Fans of the trash-talking merc will be at home with this hilarious party game. Using washable markers, players compete to finish the fill in the blanks on caption cards describing our hero in compromising situations. It’s like Mad Libs, but way raunchier.

As far as family-friendly RPGs go, Tiny Epic Quest reigns above the rest. Slay goblins, conquer temples, and learn spells in an adventure that follows a Legend of Zelda-esque progression. With every roll of the dice, kids and adults alike will learn cognitive skills – not to mention have a night of fun that doesn’t involve being glued to a screen. Also available in a sci-fi version.

8) When in Rome feat. Alexa

9) Star Wars: Edge of the Empire

Like Luke Skywalker, anyone playing this game can dive in fresh and learn as they adventure on the outer rim worlds in a galaxy far, far, away. Every dice roll determines your direction in a narrative that’s written with every turn. Create your own legends full of Jedi, Wookies, and Lightsabers in this user-friendly RPG.

Don’t submit to the forces of the Red Skull. Resist as a member of S.H.I.E.L.D. in a battle to take back the Cosmic Cube from Hydra. Use your powers of deduction to reveal saboteurs in your rank and save New York. Features all your favorite characters from the massive Marvel universe.