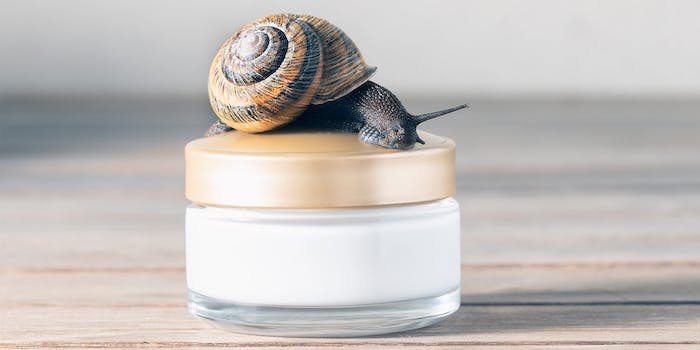 Snails are your friends.

If Korean beauty is famous for any one product, it’s probably snail cream. It’s called that because it contains one of the greatest natural moisturizers available: snail mucin. And yes, in case you’re wondering, that’s the gook that we call a “snail trail” that these little mollusks leave behind.

Gross, you say? It could be considered that, I suppose. But if you’ve eaten escargot, you’ve already eaten snail, so this is technically a lot less weird. And snails are not killed to harvest snail mucin, so we’d say you’re a lot better off smearing their goo on your face than eating them.

Is snail cream a new thing?

It seems that way from the popularity it’s enjoyed the last few years, but it’s actually not new at all. Snails were used in the 18th century for everything from skin problems to tuberculosis. Some tales even suggest that Ancient Romans allowed snails to slither across their faces in hopes of benefitting from the healing properties of their mucin.

In the 1960’s Spanish oncologist Dr. Rafael Abad Iglesias discovered snail mucin’s power by applying radiation therapy used to kill cancer cells on snails. They reacted by secreting mucin, which in turn healed injured parts of the snail’s skin right before his eyes. A few decades later, a Chilean family that owned a snail gardening business also noticed their skin was softer and scars on their hands healed more quickly thanks to handling the snails. Based on their observations, the family launched Elicina 15 years later, the very first snail-based skincare line.

Snail mucin has enjoyed a boost in popularity thanks to the advent of Korean skincare in the US in 2011, which makes heavy use of the ingredient. Many of these lines carry successful snail products today. While the power of snail sounded just like all the other skincare industry hype at first, sales tell us that customers are getting results–me being one of them.

What does snail cream do for my skin?

Since snail mucin is packed with proteins, peptides, and vitamins, it’s believed to be highly beneficial to skin in multiple ways. As I mentioned before, it’s intensely moisturizing so it’s a great pick for dry and aging skin types. Snail mucin also contains anti-inflammatory and antioxidant agents so some studies say it reduces redness and protects the skin from free radicals. Research also shows that it also boosts cell growth, sheds dead cells, and opens clogged pores. It also can be used to treat burns, dermatitis, eczema, diaper rash, and stubborn scars. Some researchers even hope snail mucin can be used to replace stitches in the future. Viva la Gastropod!

But does it hurt the snails?

Snails are not killed in the harvesting of snail mucin today. However, they excrete the substance in three circumstances–to move, while under stress, and for pleasure–so this is crucial to consider if you are thinking about using snail products.

However, not every ounce of snail mucin in your products comes from an upset snail. Thanks to Italian inventor and snail farmer Simone Sampo, a machine called the Muller One exists that sprays snails with a mist to cause a pleasurable reaction. This method of snail mucin extraction is called the Cherasco Snail Method and aims to create “the most natural and least invasive environment” for the little mollusks. It’s also extremely productive, turning out roughly about seven pounds of mucin in an hour.

However, not all the snail mucin you buy comes from Sampo’s farm (sadly). The discussion about the ethics of using snail mucin are plentiful if you’d like to read up on them before choosing to use snail mucin products. It’s best to be as informed as possible when it comes to anything you put in or on your body before use.

As I mentioned up top, Elicina was founded by a family that owned a snail farm. They made the first known skincare cream using snail mucin and contains 80% snail secretion combined with a 20% cream base. It’s also fragrance-free, so it would be a good pick if you are sensitive to strong scents.

My dear skincare buddy Fiddy Snails has sworn by this product since 2015, and I have to agree with her: it’s pretty terrific. This medium weight cream contains 92% Snail Secretion Filtrate, so it’s a dream for dry skin. It is worth noting there is a small amount of alcohol in the product even though it’s low on the ingredient list. Typically I avoid alcohol as its drying, but in this cream I don’t have an issue with it. I’ll have a jar of this in my skincare arsenal at all times. Between the price and the efficiency, it’s simply a must-have.

If you’ve never used snail cream before and you want to keep costs low, the Mizon Snail Recovery Gel cream is a good deal. It comes in a two-pack and the formula contains hyaluronic acid, centella, portulaca, and green tea extract. The addition of adenosine also helps to improve the appearance of wrinkles (bit to be fair, moisturizing your skin in general does this as well). And it can also be used on dry elbows and knees, as well as any other places on your body in need of extreme moisture.

Super Aqua Cell Renew Snail Cream is incredibly refreshing and one of my favorites creams to reach for on a spring day. That said, I also layer with it in winter because my skin needs the extra moisture. It contains 70% snail mucin and is by far my favorite product Missha makes. The Super Aqua line also features a cleansing foam, an ampoule, a sheet mask, and a sleeping mask, so if you enjoy this you might want to look into those as well.

If you want to try the most luxurious snail cream on the market, SMD Cosmetics has you covered with its Saromae Snail Serum Concentrate. It contains 62% snail mucin extract sourced from Chilean snail farms (maybe even the same one Elicina comes from? I wonder) and combines it with licorice root to brighten and paeonia lactiflora root for anti-aging. It’s paraben-free and cruelty free and can be used by every skin type. Best of all, it leaves your skin glowing.

Want to learn more about Korean beauty? Check out our guides to doing the 10-step Korean beauty skincare routine, the best sheet masks money can buy, and why Korean sunscreens are vastly superior to American ones. You can also dig through all our Korean beauty coverage right here.