This year, expect more TVs and less plates of ham.

It’s not Christmas in July without crazy deals on chef’s hats and brass knuckles! Amazon Prime Day returns July 12 for the second year in a row, and the retailer plans to offer more than 100,000 deals.

You may remember the debut of Amazon’s invented holiday last July, when it became the unfortunate butt of #PrimeDayFails jokes on Twitter. Like Black Friday or Cyber Monday, most of the best deals were snatched up in minutes, leaving less aggressive shoppers with a strange assortment of useless items, like a family pack of brass knuckles and plates of ham.

Jokes aside, there were enough good deals to break shopping records. Amazon reports last year’s Prime Day resulted in more sales than ever before in a single day, including Black Friday. The company also promised to step up its game this year, which means more TVs and less plates of ham. Almost twice the amount of TVs than Black Friday and Cyber Monday inventories combined, to be exact.

Prime Day also kicks off earlier this year with a countdown of extended deals leading up to the big shopping day. From July 5 through 11, you’ll find exclusive deals for Prime members in addition to the regular Gold Box Deals each day. So far, we’ve seen James Bond for 70 percent off and a 32-inch TV and Fire stick for $120, so it’s off to a better start.

If you want the best deals on stuff you actually care about, you can start by planning early. You wouldn’t go into Best Buy on Black Friday at midnight without a game plan, and Prime Day is no different. Here’s how to prepare.

The deals are exclusive to Prime members only. But don’t worry, if you’re not already a member, you can try Prime free for 30 days. In addition to the exclusive deals, you get free two-day shipping, and access to Amazon Instant Streaming (basically Amazon’s Netflix). If you want to take the full plunge, membership costs $99 annually.

2) Know the deals ahead of time.

Check out “Today’s Deals,” and you can browse upcoming deals before they even start. There are a few different types of promotions that will be available on Prime Day:

Prime Spotlight Deals: Think of these as your deeply discounted, limited-supply doorbusters. Once they run out of stock, the product will return to its normal price or be sold out completely.

Lightning Deals: These discounts only last a few hours, and you’ll see the percentage claimed beside a timer. Once the time is up or 100 percent sold, you can join a waitlist and be notified if someone backs out of the deal and an open slot becomes available.

Prime Savings and Deals: These are typically broader deals that will last all day on Prime Day, or until supplies run out. Be sure to check “see details” under each deal to see more items included in the sale. 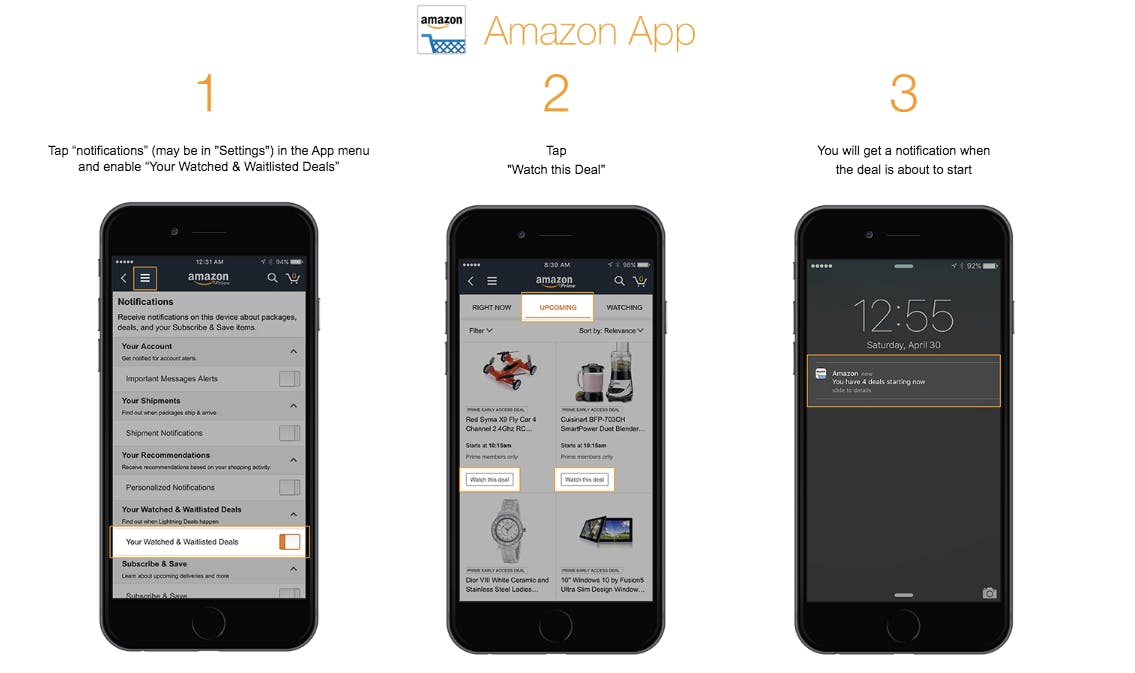 The easiest way to keep up with the deals is using the app features. You can mark deals you want to keep a close eye on and create a watchlist of items in case they go on sale. Just make sure to alter your account settings, so you get notifications immediately when the deal applies.

The best deals will go fast—we’re talking minutes fast—and the last thing you want is to lose a deal while it’s in your shopping cart. Fill out your shipping and billing information ahead of time, then enable 1-Click shopping, you will be immediately charged within…well, one click. Just make sure that the address under your 1-Click settings is correct, in case you have multiple shipping addresses filed in your Amazon account.

The beauty of shopping online is that you don’t have to fight herds of shoppers IRL over things like waffle irons, and instead shop from the comfort of your own bed. But don’t get too comfortable. Prime Day went live at 3 am ET/12 am PT last year, and the best deals will likely start earliest, so set your alarm, brew some coffee, and plan on waking up at an unnatural hour.

No matter how early you plan on waking up, we’ll be scouring the best Prime Day deals for the week, so be sure to check back here.