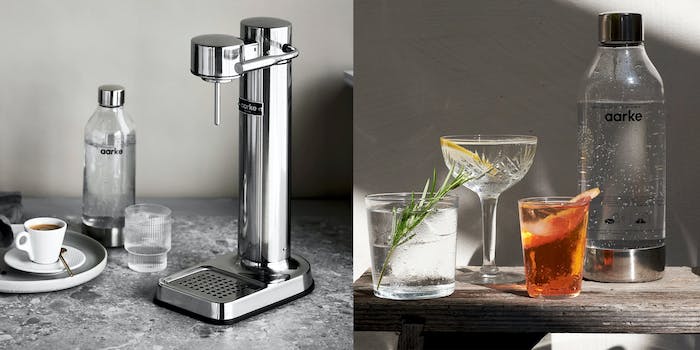 Summer is in full swing, and with the season comes its usual nonsense. Namely, the unbearable heat. And while I contest that all the best beverages have bubbles, fizzy drinks just hit different when the temperature hits triple digits. When it comes to homemade seltzer, there’s probably a name circling through your brain. But there’s a new king of fizzy in town, and its name is the Aarke Carbonator III.

What is Aarke Carbonator III?

Aarke Carbonator III: Is it worth it?

I spent an entire week playing this seltzer maker before writing word one of this review. Being a bonafide seltzer fan, I have some familiarity with seltzer makers. The honeymoon wears off after a while. Why? The everpresent “bubble problem.” Home seltzer, more often than not, simply doesn’t have the effervescence of the stuff in the can.

There are a handful of other annoyances that come with these machines. After a week, I’m a new convert and will likely be making the homemade stuff for years to come. Here are a few things I enjoyed about the Aarke Carbonator III.

Making a liter of seltzer with the Aarke Carbonator III isn’t just intuitive, it’s pretty fun. Despite the tech-savvy look, it doesn’t require more than an easily installed Co2 tank. No wires or batteries here.

After screwing in the PET bottle, under the nozzle, a simple jerk of the level begins to fill the bottle with bubbles. The machine will tell you when to let go of the lever, a mini-boom happens in the bottle which was a little striking the first time I made seltzer. After the initial hit of bubbles, you can jerk the lever two more times, depending on the amount of bubbles you want in your seltzer. Speaking of bubbles…

2) As much fizz as you can handle

The aforementioned “bubble problem” is a big crux with many seltzer machines on the market. The Aarke Carbonator III produces bubbles, and produces them in abundance. If you like the light tingle you find in brands like San Pellegrino, one hit will do. Me? I like my seltzer so bubbly that it almost feels spicy. Three hits of Co2 make a soda that makes brands like Bubly and Polar feel flat.

The PET bottle does a great job at keeping those bubbles fresh, even after a day or two in the fridge. Best of all, despite having a drip tray, I don’t think I’ve spilled a single drop in the seltzer making process.

We can admit that most seltzer makers are eyesores. A seltzer maker––if you’re going to use it regularly, anyway––is one of those appliances that has to live on a countertop. The Aarke Carbonator III looks so great I was more than happy to make space for it, right next to the super-automatic espresso machine.

The stainless steel finish really makes this machine pop. It even comes with a small cloth for regular polishing. If stainless steel isn’t your thing, the machine is available in matte finishes as well.

Stuff I made with the Aarke Carbonator III

Yes, the machine only carbonates water. That said, it makes a great canvas for refreshing beverages when you combine seltzer made in the Aarke Carbonator with simple syrup, flavor essences, and if you’re down to party, some hooch. Here’s what I made using my Aarke Carbonator III.

The Aarke Carbonator III makes some seriously tasty seltzer. Its approach to carbonating water is delightfully lo-fi. Seltzer is made not with a button, but with a lever, making soda jerks of us all. It’s a fun procedure, but more importantly, an effective one. Like any great carbonator, you can personalize the fizz in your beverage, from light bubbles to bracing effervescence. After the seltzer is made, the beverage frontier is almost limitless, whether you’re making homemade soda or cocktails.

Perhaps most importantly, the Aarke Carbonator is so sleek you’ll never want to tuck it away in a cupboard. It screams “bougie” and will dazzle friends and enemies alike. If you’re going to make seltzer at home, there’s truly only one game in town I can recommend: the Aarke Carbonator III, available on Amazon for $219.